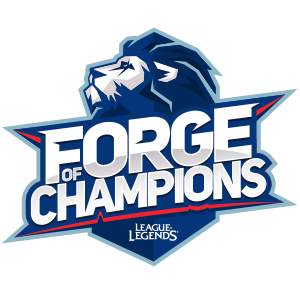 You can check the regulation of the competition here.

Before starting a match

All matches played in online competitions will be played on the LIVE server, with the latest patch available.

To create the match you must press the button “Play”, press on the trophy icon (at the right of the “Join Custom” one) and paste the tournament code provided on forgeofchampions.arenagg.com.

In case the code would not work for any reason, the team on the left side of the match sheet on forgeofchampions.arenagg.com will create the lobby within the game to play the match. To create the game you must press the “Play” button, “Create custom game”, choose the “Summoner’s Rift” map, “Tournament Draft” mode, and click on “Confirm”. Once created, you will have to invite your opponents to the game (indicated on the match sheet) or tell the opposing team what the name and password of the game lobby are for them to enter.

The team names may not contain vulgarities or be offensive. LVP reserves the right to disqualify a team if its name is inappropriate.

The team placed on the left side of the match sheet or on top of the bracket will have the choice of side.

Placeholders are not allowed in the picks and bans phase, once it starts it must be run completely with the champions that each player has available. In the event that a team leaves the selection of picks and bans without any justification and evidence, they will lose a map. Teams are recommended to record the whole picks and bans phase by video to present possible evidence in case of conflict.

The player’s summoner name must not change after registration, nor are they permitted to use another account. Names may not contain vulgarities or be offensive. The LVP will notify the team in question if the summoner’s name is not acceptable.

The players must be correctly positioned in the order Top, Jungle, Mid, ADC, Support. Once the champion selection is locked in, the players will have to complete the champion changes and summoner spells before the counter reaches the second 20, otherwise they will be sanctioned.

If there is any issue related to runes, “bugs”, pre-game disconnections before the match begins, you must pause the game and inform the rival team before minute 2.00, only if there has not been a First Blood or an important position (Blue or Red buff) has been stolen, If nothing of this has happened the match will be restarted, otherwise the game will have to play on.

Starting from the time set to play the match, you have 60 minutes to play the match and insert the result in the web, if the game is still being played after this time, you will have to open a ticket to the Support page with the screen captures of the game results.

It is recommended to be available fifteen (15) minutes before game time. At that time, players should have the latest patch updated, the game settings correctly configured, and the rune pages ready.

After the scheduled start time, if all five (5) players are not present, the team will be disqualified from the tournament. Matches with less than five (5) players in any of the teams will not be started. To report the non-attendance, you will have to go to the match sheet, select “Conflict” and attach the corresponding evidence where you can see correctly that you have appeared and the opposing team has not done so.

There can be spectators in the lobby only if both teams agree or they are appointed by LVP. Otherwise, the spectators will have to leave the lobby.

Not showing up in a game or having a different Summoner name will result in forfeiture of the match.

Not showing up in a match in Quarterfinals, Semi-finals, Finals or third/fourth seed will mean a PERMANENT ban of the platform.

Each team has a 10-minute pause on each map, after which time the match must be resumed, for justified causes (disconnections, internet issues, etc.). A team can give part of their time to the other team if they want to. The match can be resumed only when both teams have confirmed that they are ready.

In the event of an unforeseen problem with the game server or another external cause that prevent the match from being played on the official date the match will be rescheduled for another day and must be played with the same team and roster as the date of the match.

Victory due to external causes

In extreme cases, if an unexpected issue occurs with game servers and the match cannot be finished, if the timer is over 20 minutes, a referee can award victory to a team if he/she considers that the other team cannot avoid defeat with a reasonable certainty. The following criteria can be taken into account to make such decision:

If there is a 33% gold difference between both teams.

If there is a turret difference of 7 or more destroyed turrets between both teams.

If there is an inhibitor difference of 2 or more destroyed inhibitors between both teams.

In any other circumstances an alternative to achieve match resolution will be worked on to satisfy both teams.

Every match will be monitored by a referee, who will have absolute power to enforce the game rules during the match.

Decisions will be made according to the referee’s best criteria, following the game’s rules, tournament regulations and fair play and will be based on the referee’s point of view.

Referee’s decisions about game related events, including remakes, to resume or not a game or the result of a match, are final.

If the game has been resumed or the match has finished, the referee cannot change a decision if he/she realizes that it was wrong or if another member of the referee team points it out.

The referee will take disciplinary action on players who commit cautionable or expellable offenses.

The referee will have power to take disciplinary action from the moment a session starts in order to do an inspection previous to the match until the match ends (including any pause and breaks). If a player commits any expellable offence before the match starts, the referee has power to ban the player from playing the match, and referee will elaborate a report about any kind of inappropriate behaviour.

The referee panel will also can take action on any technical staff of a team who act in an inappropriate manner.